Crossing Saddle Creek on the footbridge, it seemed I had been transported to another place. First, there was a hill to climb – in Florida? The tall trees, the dense understory of lush ferns, curtains of vines hanging from huge limbs made it feel as if I was in a rain forest in the Amazon. A huge dragonfly rising from the path completed the illusion.

In reality, I was exploring an unfamiliar section of what has become a familiar patch, Tenoroc Fish Management Area. Parts of the 7,000+ acre reserve include several lakes which are geographically separated from the main area where the headquarters building is located. Lost Lake East and Lost Lake West are designated as canoe/kayak fishing only and no fishing from the bank is permitted. The good news for me is that hiking is allowed and a nicely maintained trail circumnavigates Lost Lake West. I hiked just over two miles along a ridge (remember that hill?) between the two lakes, descending at the southern end of Lost Lake West into a wet hardwood forest which then turned northward adjacent to the western edge of the lake. The walk was very scenic and enjoyable.

My goal was to determine if this area contained suitable habitat for attracting migrating songbirds. It did. The canopies of very tall hardwood trees are ideal for the flocks of insect hunters which will soon be looking for high protein snacks as they proceed southward. The lowland swampy woods had sections of dense willows, perfect for protecting foraging warblers. Saddle Creek meanders through the area and its banks are covered in dense weed growth attractive to myriad insect species which will, in turn, be attractive to birds looking for tasty bugs.

Although the elevation of the trail was slight by most standards, any elevation in central Florida is uncommon. The view from the eastern portion of the trail provided a unique perspective as I was able to look downward to the surface of the lakes and actually into the tops of trees from above them. I found a nice selection of birds along the way, including: Downy and Pileated Woodpeckers, Carolina Wren, Northern Parula Warbler, Yellow-throated Warbler, Tufted Titmouse, White-eyed Vireo, Fish Crow, Osprey, Cooper’s and Red-shouldered Hawks along with Limpkins, ibises, herons and egrets along the lake shore.

Toward the end of the walk, I took a break and sat against a stump for a few minutes. Over my head, I spotted an early fall migrating warbler, a female American Redstart. A Carolina Wren, still in molt, hopped all around trying to figure out what I was. Movement of a larger bird high in an oak tree turned out to be a Yellow-billed Cuckoo.

The scouting trip turned out even better than I hoped and now that I have found them, these lakes shall no longer be “Lost“!

The state of repair of the footbridge across the creek gives one the impression the trail may not be used all that often. Just the way I like it! (The trail itself turned out to be in good shape.)

If it hadn’t moved, I doubt I would have noticed this drab-colored Twilight Darner (Gynacantha nervosa) despite its relatively large size.

Four Tufted Titmice alternately scolded me and chased insects from the branches of tall trees along the trail. 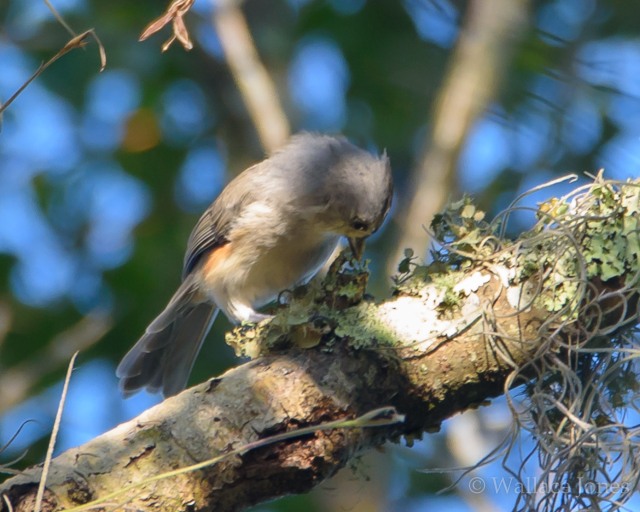 Northern Parula warblers have a wonderful ascending call and their bright yellow breasts really stand out as they flit quickly from limb to limb. This one was framed nicely by the feathery leaves of a Sweet Acacia tree (Vachellia farnesiana).

A pair of Downy Woodpeckers probed the branches for breakfast. The male was camera shy but the lady of the house posed briefly for a portrait.

The trail along the ridge between the two lakes afforded a unique look down onto the top of the forest canopy and the surface of the lakes. 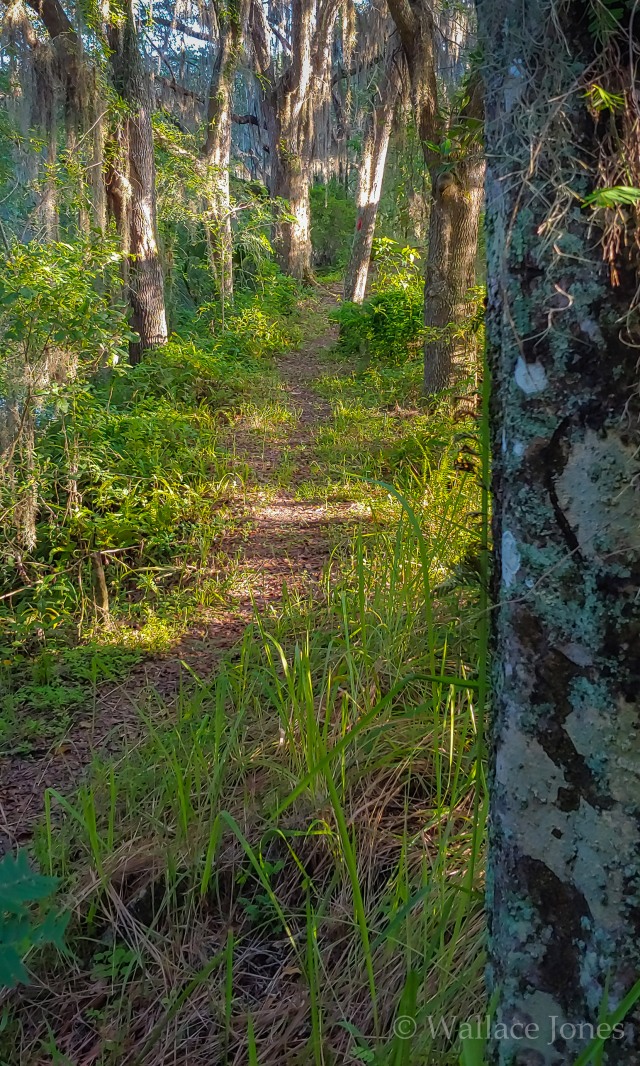 I was only able to grab a couple of quick photographs of this damselfly before it disappeared into the forest. My best guess is that it is a Powdered Dancer (Argia moesta), which would be a first for me and for our county. If anyone can help, it would be appreciated!

A curious Carolina Wren kept peeking at me while I took a break. It has not quite completed its annual molt and looks a bit unkempt.

This early bird is getting the worm. And the beetle, And the caterpillar. And anything else she can find. The female American Redstart, a warbler, flares its tail and wings with yellow patches to frighten insects from hiding places. Redstarts are one of the earliest warblers to appear in our area as fall migration is beginning. 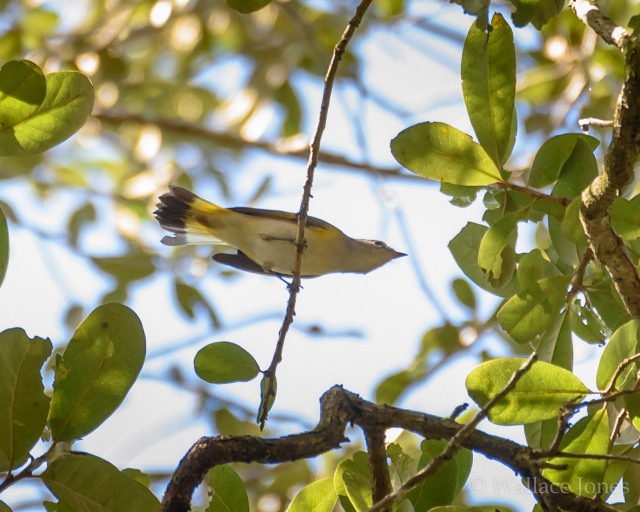 One of the few warblers which resides here all year is the Yellow-throated Warbler. It is relatively large for a warbler and has crisp black and white plumage along with its namesake bright yellow throat.

Leaning against a stump, a movement caught my attention. Eventually, a Yellow-billed Cuckoo materialized above my head. He continued to cluck at me which made taking a nap really difficult.

At the end of the trail, a fluttering Ebony Jewelwing (Calopteryx maculata) paused on a leaf for a moment. The dense tree canopy didn’t allow much light through so the image is not the best, but the subject is still beautiful. 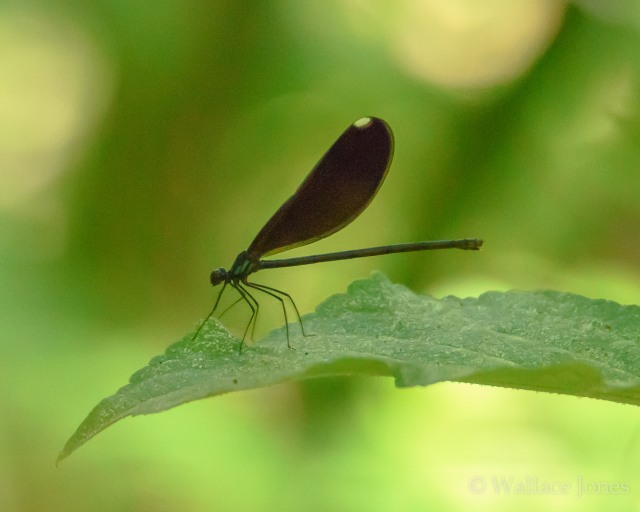 Back in the car, I called to see if Gini needed anything from the store. “How was it?”, she asked. “Very interesting”, I replied. “I guess you’ll be going back.” I guess I will.