Anticipation. One dictionary definition describes it as “pleasurable expectation”.

As my memory cells fade into unreliability, a few still meld and conjure up examples of “pleasurable expectation”. Fishing trips. When I was very young, Dad would come home on a Friday afternoon and walk around the boat, check the level in the gas tank, put the tackle in the truck – “Want to go to Panasoffkee in the morning?”

Anticipation. Now I couldn’t sleep. Vivid thoughts of the boat sliding into the cypress tree tea-stained water, fog hugging the lake’s surface, dipping minnows from the bait bucket, the tug-tug-tug on the line, sandwiches up the creek by the spring. No sleep. Let’s go!

One would think now that I am an old man, such childish dreams of upcoming trips would fade. One would be mistaken.

An otherwise ordinary plan to visit a local fish management area to search for young birds, insects, flowers and to just enjoy a day in nature results in tossing and turning during the night. Visions of the island rookery with alligators cruising all around it, new dragonflies to discover, the aroma of pine trees in the air, purple passionflower in bloom. Let’s go!

The rising sun illuminated the small guard building where we would check in and get our permit to visit the lakes of the Mosaic Fish Management Area in south Polk County, Florida, just northeast of the community of Bowling Green. We’ve been here many times and always discover something unique.

Wait. The door is locked and no one around. A notice says “This office will be open Friday through Monday, 6:00 a.m. until Noon.” It was Friday. It was 6:20 a.m. A drive by the access roads to the lakes confirmed all the gates were locked.

So much for anticipation.

Without hesitation, Gini The One With Common Sense says: “Hardee Lakes Park is not far from here.” Let’s go!

This is our first visit to the county park this year. It’s one of our favorite spots to spend the day due to the diverse habitat surrounding four lakes. We pull past the entrance and immediately hear Sandhill Cranes trumpeting and the clear songs of Eastern Meadowlarks. Parking under tall pine trees near the shore of the lake, Gini spots a large bird flying low and landing near the lake. As I begin to wander in that direction, “It’s an owl!”. She got a terrific look at the Great Horned Owl perched in a pine tree as it was mobbed by Boat-tailed Grackles and Red-winged Blackbirds. As I maneuvered to get a photograph, the big raptor took off. I managed to get the tip of her tail in focus.

It was an exciting beginning to what would be a glorious day of discovery! And I didn’t even lose any sleep thinking about it the night before.

One of our smallest dragonflies, the Eastern Amberwing (Perithemis tenera) takes on a golden glow in the early morning sunlight. Females usually have dark wing markings while the males are more clear-winged. 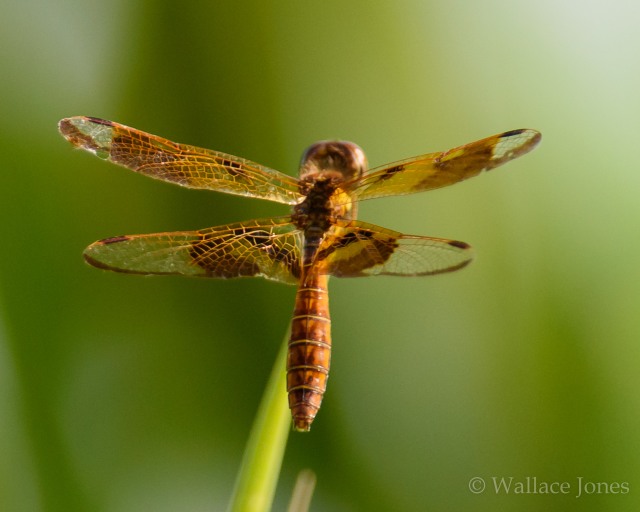 With a wingspan of nearly 30 inches (76 cm), the Pileated Woodpecker is an impressive sight. The flash of black and white wings and flame red crest can be quite attention-grabbing! 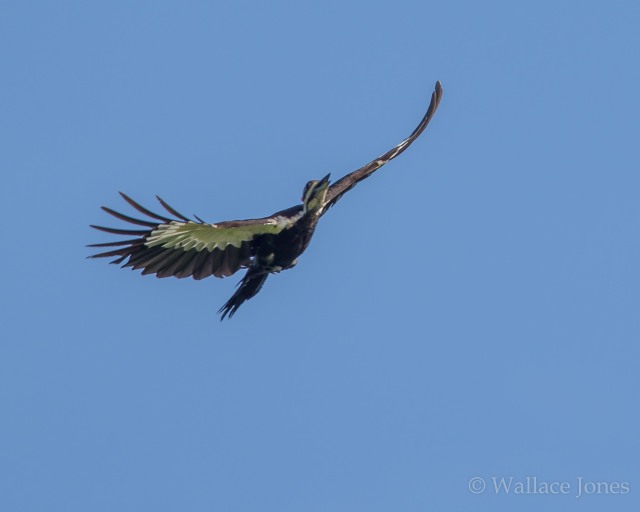 We probably saw over a hundred Four-spotted Pennants (Brachymesia gravida), one of the area’s most common dragonflies. As with many Odonata species, young males resemble females until they mature.

Complete with sporty racing stripes and cool blue abdomen, the male Blue Dasher (Pachydiplax longipennis) is ready to “dash” after any likely-looking prey at a moment’s notice. 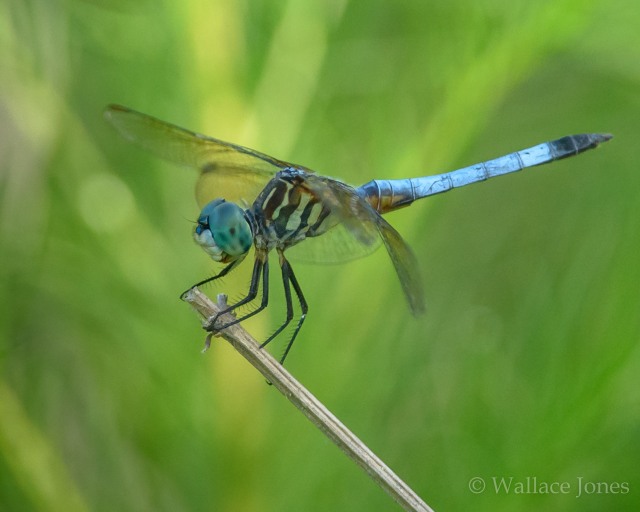 A fairly large dragonfly, the immature male Roseate Skimmer (Orthemis ferruginea) resembles the female but is beginning to show a slight purple tint to its abdomen which will eventually turn almost neon in the near future. 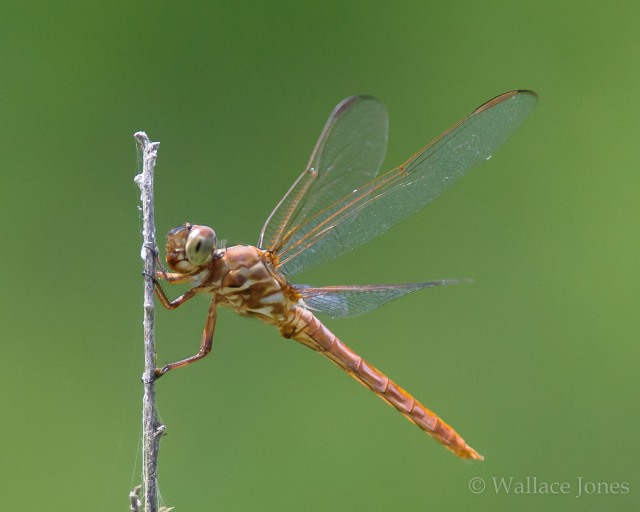 Probing the bark of a pine tree for breakfast, this young male Red-bellied Woodpecker will soon display the brighter reddish-orange cap and nape of a fully mature adult.

We will pretend to be scientific when we refer to this shiny green insect as a Halictid Bee. It just sounds so much better than Sweat Bee. (Halictidae spp.) 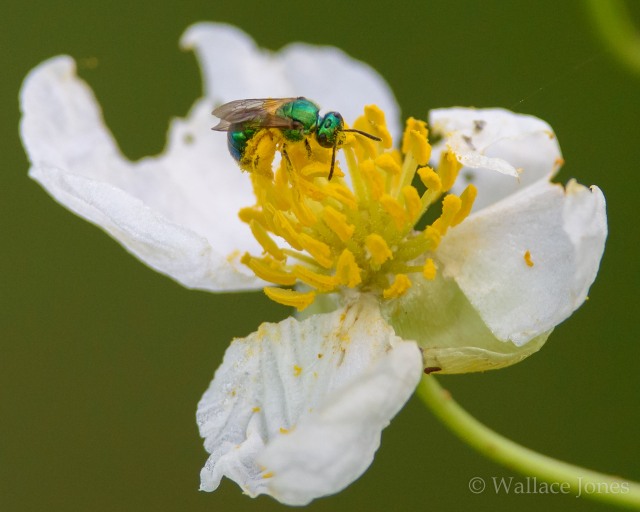 I stood in one spot for about 20 minutes observing and photographing near a lake shore. Turning to leave, I discovered a Purple Gallinule about 20 feet away had been observing ME! 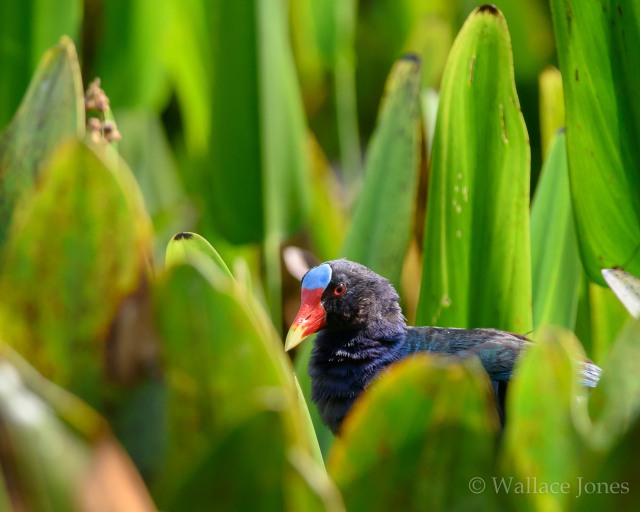 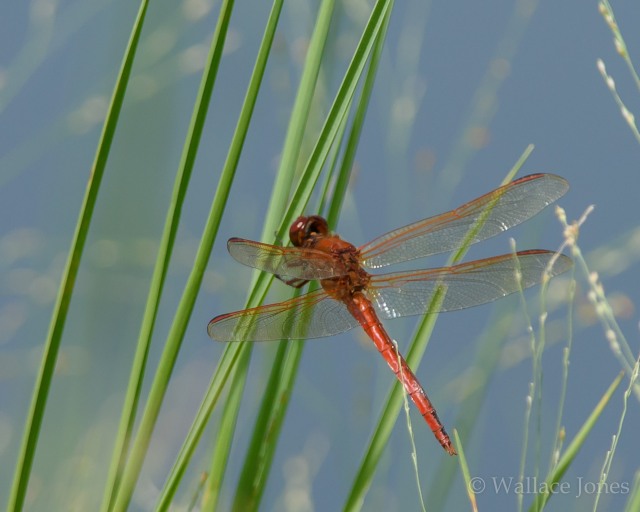 Unlike the invasive Cuban Brown Anole above, the Green Anole (Anolis carolinensis) is a native resident. There was concern the invader would negatively impact the native population but recent studies suggest our Green Anole is doing okay.

Male and female very often look nothing alike in some species and dragonflies are no exception. The male Slaty Skimmer (Libellula incesta) is dark overall while the female is lighter and displays a sporty wing pattern. 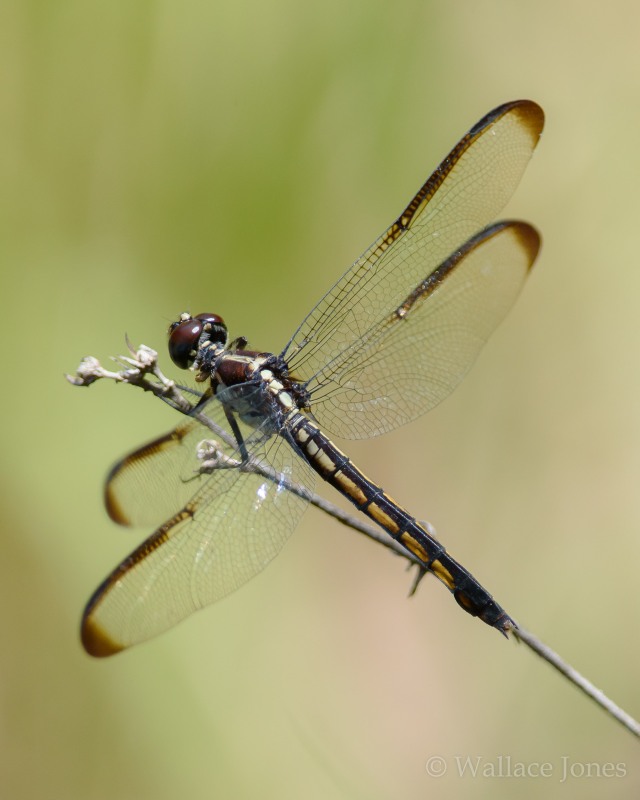 A female Eastern Pondhawk (Erythemis simplicicollis) looks like a beautiful green jewel shimmering along the edge of the marsh.

Our day wouldn’t be complete, it seems lately, without finding one of our more efficient predators, a Robber Fly (Asilidae spp.). For those familiar with rock bands, you may recognize a member of “ZZ Top”.

Anticipation of a specific event need not turn to disappointment when that event cannot occur. Our “pleasurable expectation” was fully satisfied. “Plan B” was executed flawlessly, whether by intention or happy accident. We hope your plans, no matter what letter they may involve, include a heavy dose of anticipation and satisfaction.

← On The Ridge
There Are No Ordinary Days →