June in Florida. Very early in the morning, one can imagine the air still has the lingering coolness most people associate with spring. It’s a hallucination. If you take more than two steps through the greenery, your feet and calves are immediately soaked in dew. Humidity manifests itself by making you feel as though you have stepped into a sauna. As there is no breeze, walking briskly helps evaporate the drops forming on your face providing momentary relief from the oppressive warm wet atmosphere closing in around you.

And then, right in front of you, an apparition materializes. A Florida Scrub Jay! The rising sun highlights the bird’s spectacular blue plumage. It has acorns in its beak, glances briefly in your direction and in a moment, it’s gone. Endemic to our state, these large jays inhabit a few areas of scrub oak habitat and remain in loose family groups throughout the year, with young birds from last year’s brood helping to raise new birds.

The temperature and humidity are forgotten. The day has begun for Gini and I as we approach the entrance to the Arbuckle Tract of the Lake Wales Ridge State Forest. A few million years ago, ocean levels rose to cover most of what is now the peninsula of Florida. A ridge running north and south was all that remained. Flora and fauna evolved which was biologically unique. As ancient sea levels receded and tourists discovered white-sand beaches, the Lake Wales Ridge retained some of its special characteristics and today lists 33 plants and 36 animals currently having federal or state status as threatened or endangered.

Eastern Towhees sounded off on all sides: “drink-your-teeeeea“. Gini’s sharp eyes spotted a gorgeous Red Saddlebags dragonfly. A Wild Turkey wandered along a forest path in front of us, seemingly unconcerned by our presence. Diminutive Brown Nuthatches high in the surrounding pine trees sounded like so many rubber duckies being squeezed.

Breakfast by a pond. Red-headed Woodpeckers taking insects to their nearby nest cavity. The brilliant blue flash of Eastern Bluebirds. New Tufted Titmice trying out alarm calls at strangers under their branches. A bright red Summer Tanager singing to his mate, forest flowers, a multitude of dragonflies, more birds and, suddenly, it was after noon.

The heat and humidity had been ignored all morning as we marveled at what diversity Nature presented us. Just us. We encountered no other humans during our morning of exploration. There was no urgency to list a rare bird. No schedule. Glorious!

Tracks in the road let us know about unseen forest dwellers. Here, a White-tailed Deer and a Coyote passed this way during the night. One following the other, perhaps? 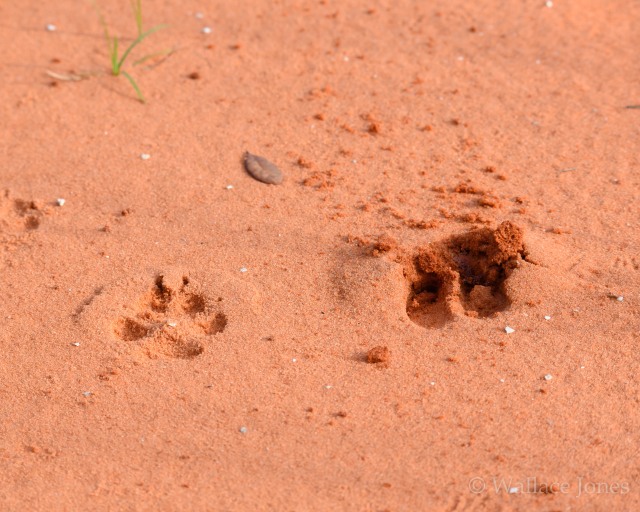 Throughout most of its eastern U.S. range, the Eastern Towhee has reddish eyes. In Florida and parts of Georgia, resident birds have light eyes which field guides describe as “straw colored”. 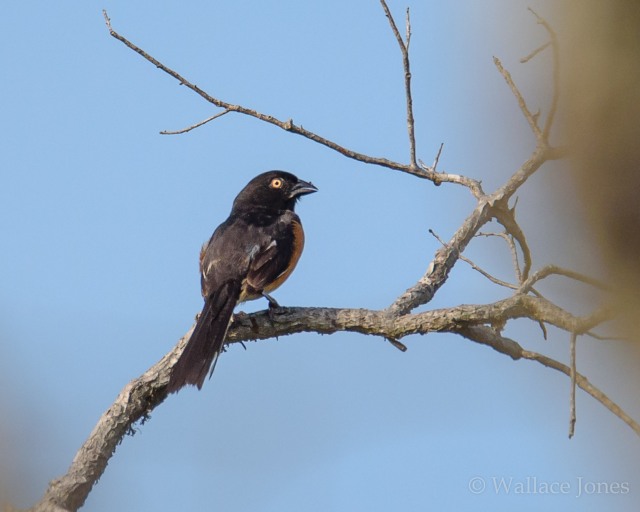 Gini frequently says: “Why won’t that turkey pull over and let us pass?”. Normally, she is not referring to a bird, such as this Wild Turkey out for a leisurely stroll. 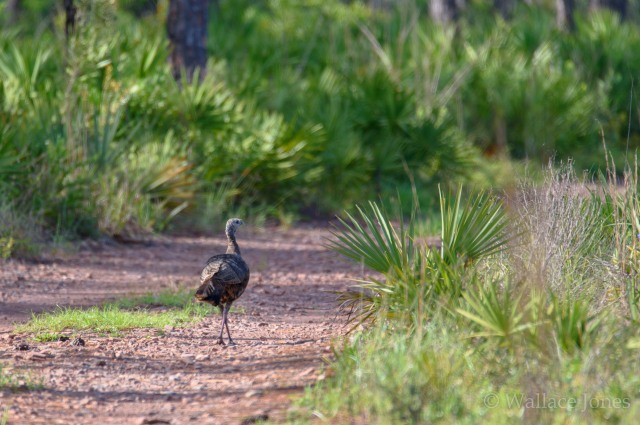 This Red-headed Woodpecker is an immature bird, since his head shows a mix of red and brown. 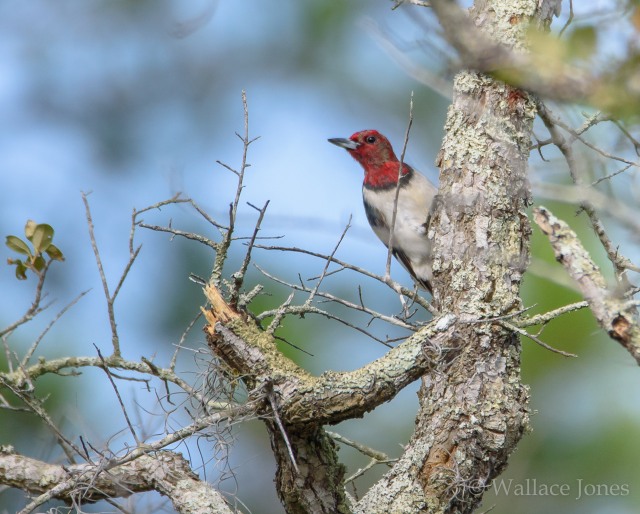 The Carolina Satyr (Hermeuptychia sosybius) is a fairly common sight along woodland trails. 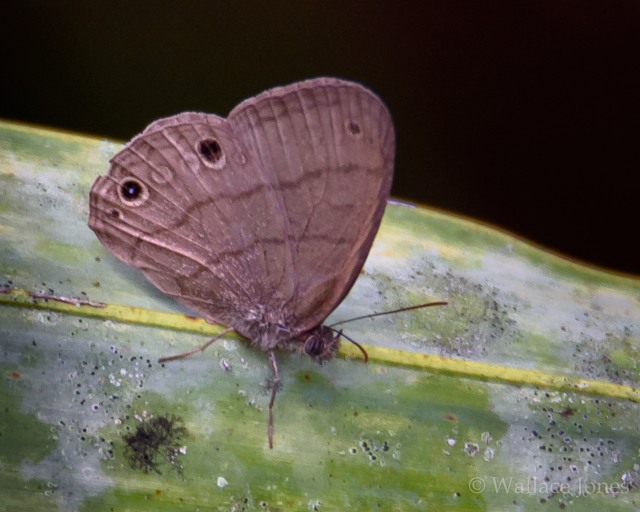 A medium-sized lizard, the Southeastern Five-lined Skink (Eumeces inexpectatus) is somewhat common in our area. Young males have a striking bright blue tail which fades with maturity. 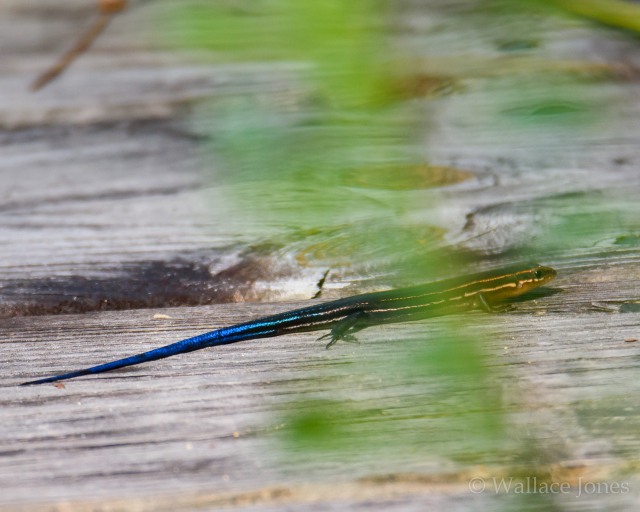 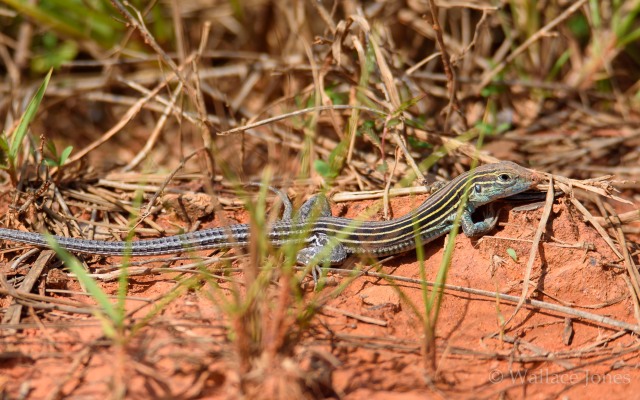 It’s all about the birds and the bees. Well, in this case, the bee. A Bumble Bee loaded with pollen prepares to visit an American White Waterlily (Nymphaea odorata) to unload her cargo. The lily will repay her with sweet nectar. 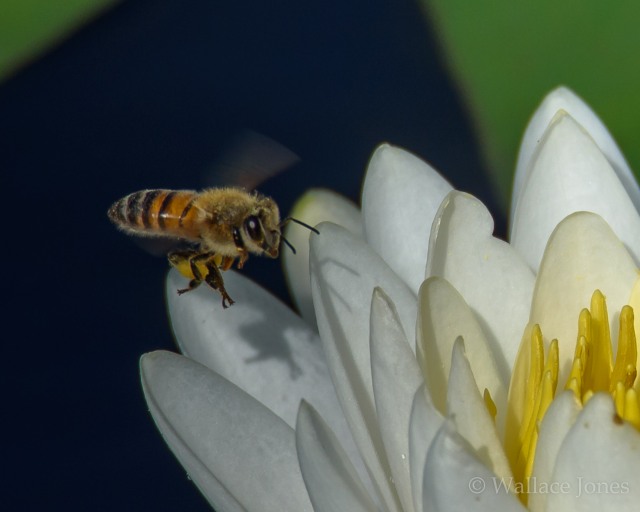 Another Florida endemic species, the Yellow Milkwort (Polygala rugelii) is quite showy within the green of the pine forest. The header image gives you an idea of a typical pine flatwoods scene. We felt quite special knowing we were observing a flower that does not grow in any other state. 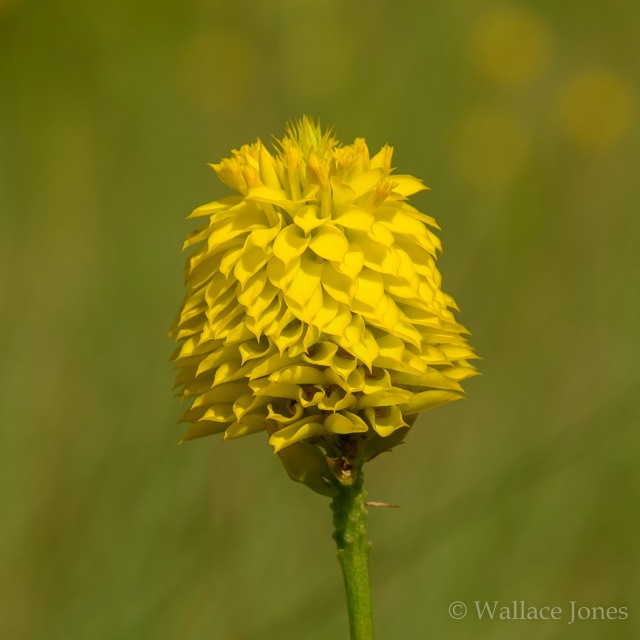 Once again, the keen brown eyes of my beloved were on the job! Gini spotted a pair of Great Crested Flycatchers, most likely mates. The raised crest and lemon-yellow belly is hard to miss. 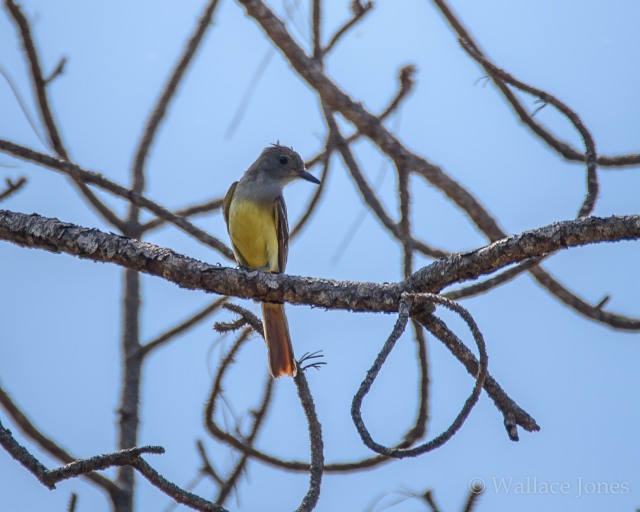 Not content with just locating birds and bugs, Gini finds blooms, too. In this instance, a bright orange Butterfly Milkweed (Asclepias tuberosa). 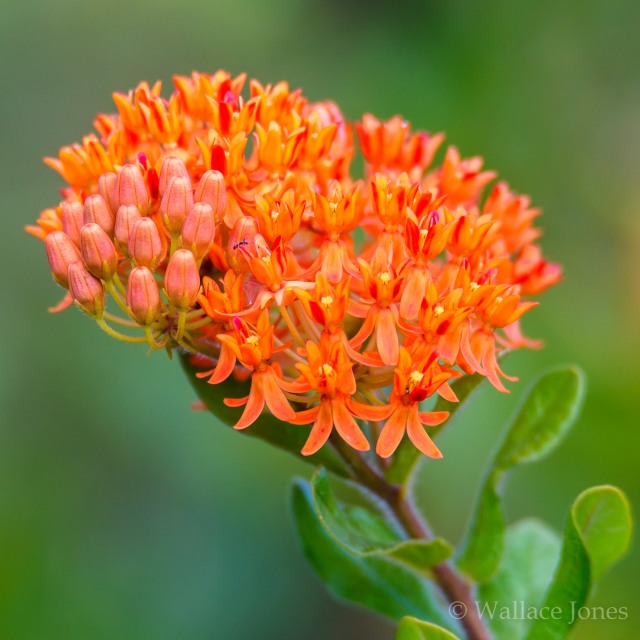 A family of Tufted Titmice (two adults, two young) immediately showed up and raised alarm calls incessantly along a section of path. This one was particularly brave, flying out for a look and returning to his branch to keep up his calling. 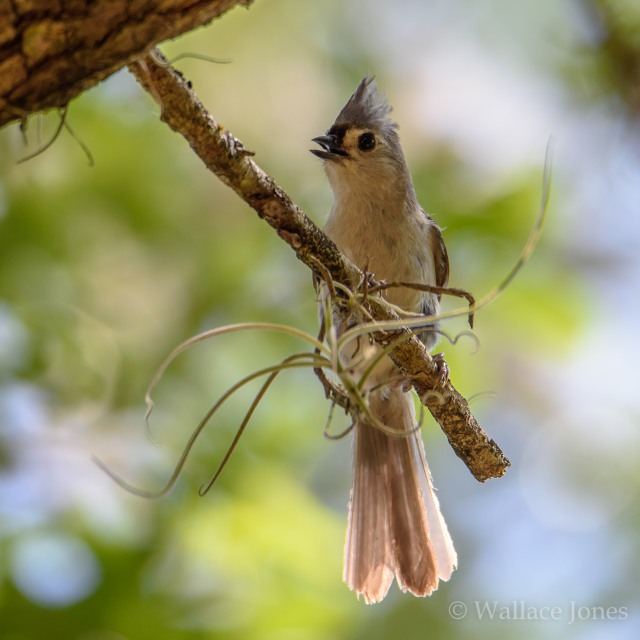 This one took our breath away with her beauty. An Eastern Tiger Swallowtail (Papilio glaucus) posed nicely and we appreciated it! 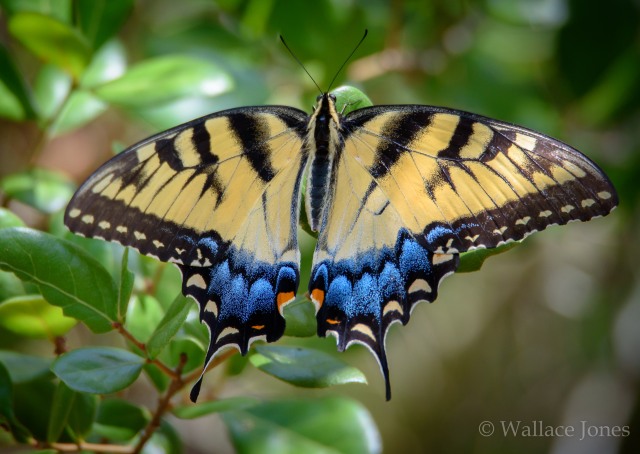 A few steps from the above butterfly, a male Summer Tanager was singing from the very top of a tall tree. He eventually flew down to confirm we were no threat, returned to his perch and resumed singing. 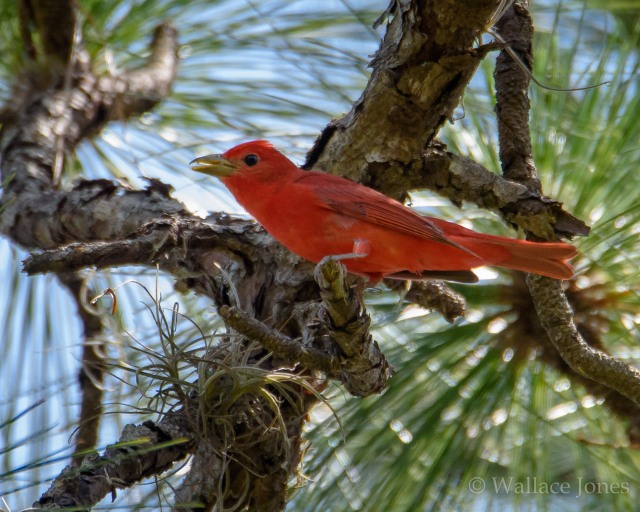 All through the morning we heard the ascending notes of singing Northern Parulas. This is one of only a few woodland warblers which breed in our area of Florida. 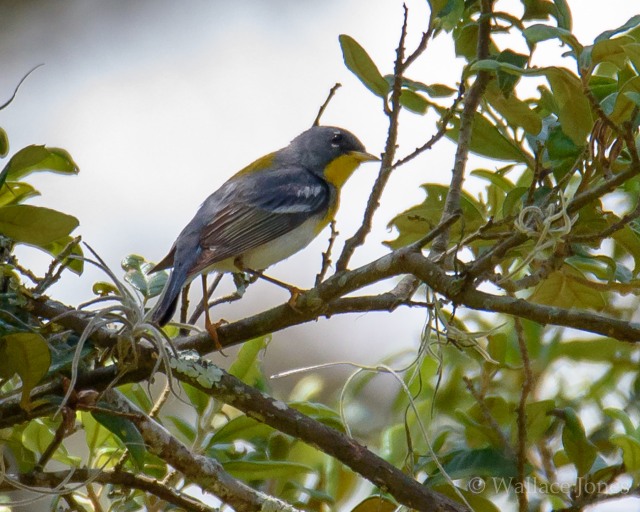 The Green Anole (Anolis carolinensis) continues to face a challenge from the Cuban Brown Anole (Norops sagrei) which was introduced in Florida over 50 years ago. They prefer the same habitat and prey and the brown anole was considered a real threat. Recently, however, it seems the native green anole is holding its own. Fingers crossed. 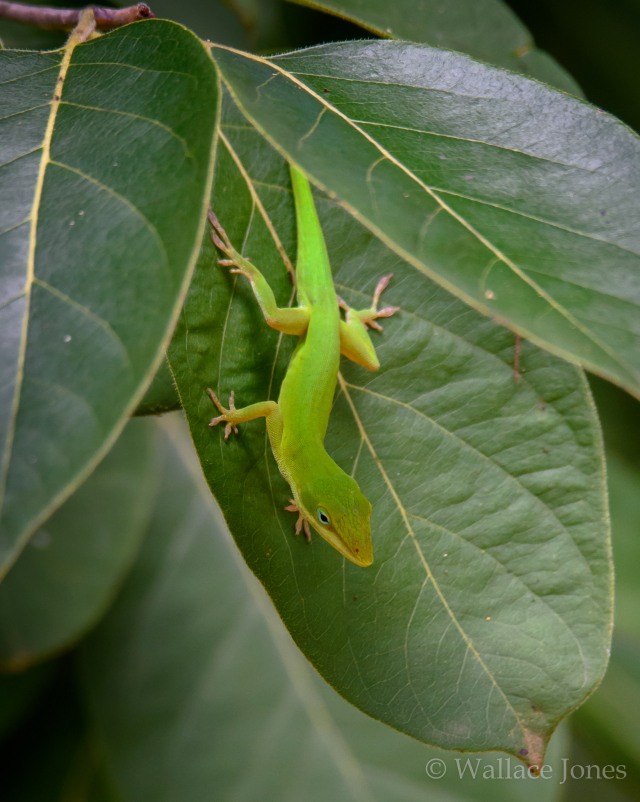 One of three medium-sized all dark dragonflies in this region, the Bar-winged Skimmer (Libellula axilena) has a distinct face and wing pattern as well as a pale wash at the base of its hindwings. 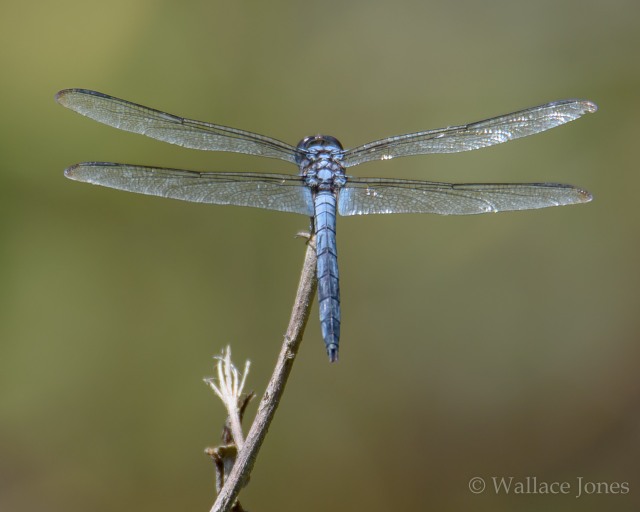 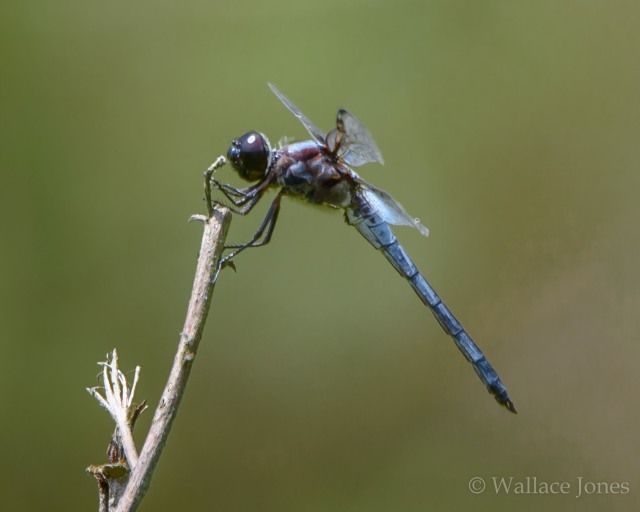 In our area, we have three species of “broad-saddled” dragonflies (Black, Carolina and Red Saddlebags). This Red Saddlebags (Tramea onusta) displayed its namesake wing feature for us. 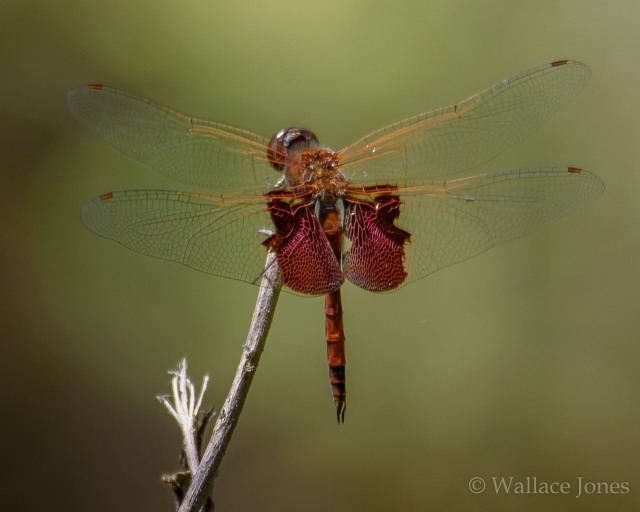 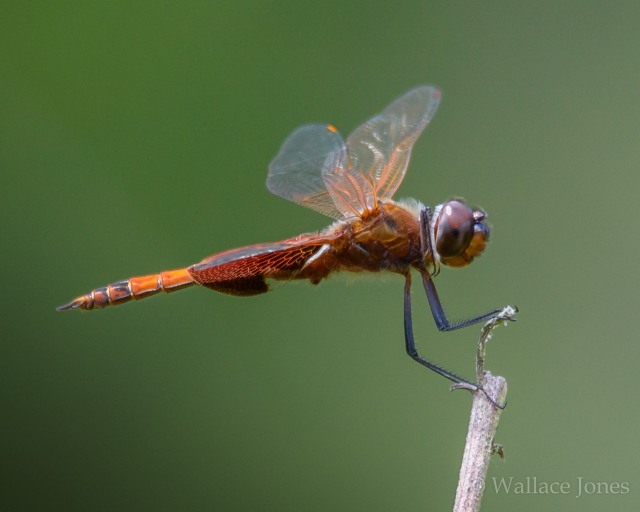 Florida in June means heat and humidity. For those of us who love nature, it means new bird babies, a bonanza of buzzing bugs and beautiful blooms in the forest. No matter what your June weather brings, find a place to explore and relax.

← Morning At Saddle Creek
Plan B →