A review of last year’s records began as a search for early fall migration arrival dates. It soon devolved into a tragic tale of ancient Babylon, unfulfilled love and blood-soaked —

I’m getting ahead of myself.

The data indicated a few early American Redstarts might begin arriving as early as the last week of July. Where would be the most likely place to search for them? Several choices presented themselves. Wait. What’s this? About this time last year, we found Hummingbird Clearwing Moths (Hemaris thysbe) at Colt Creek State Park. They were feeding on thistles. Hey, thistles are blooming now. This species feeds in the daytime. Hey, that would make taking pictures a bit easier. That settles it. Set the clock early.

Hemaris thysbe. You DO, of course, remember the tale that old Roman Ovid spun about Pyramus and Thisbe, don’t you? What? You DON’T??

Ancient Babylon. The most handsome lad in the city, Pyramus, lived next door to the most desirable girl in the city, Thisbe. Their homes were connected by an adjoining wall but their parents forbid them to associate with one another. A crack in the wall allowed them to communicate and words of love grew more intense as time passed. One day, they agreed to meet under a mulberry tree at the edge of town. Thisbe arrived first but a lioness appeared, blood covering her muzzle as she had just dined on an ox. Thisbe was terrified and ran to a nearby cave, dropping her scarf under the tree. The lioness shredded the scarf, leaving blood stains from the ox on it. Pyramus showed up, saw the lioness, which ran away and discovered the blood-stained scarf. Distraught at what he thought was the demise of the fair Thisbe, he thrust his sword into his heart. Thisbe returned to find Pyramus breathing his last, took his sword and fell on it herself. Ovid tells us the blood of the ill-fated pair splashed on the ripening mulberries, which had, heretofore, been white. From then on, ripe mulberries turn dark red to symbolize the deaths of the Babylonian would-be lovers.

The Hummingbird Clearwing Moth (Hemaris thysbe) was given its Latin name by Danish entomologist, Johan Christian Fabricius, in the 18th century. He apparently was a fan of Ovid. Hemaris may be from the Greek “hema” meaning blood and “thysbe” refers to Thisbe from our story. The color of the body and wing borders of the moth reminded Fabricius of the blood spilled by the lovers.

Who says science is boring?

Hummingbird Clearwing Moth (Hemaris thysbe) among the thistles. This moth averages about 1.5 inches (38 mm) in length and about the same in wingspan. (Most actual hummingbirds are nearly twice as large.) 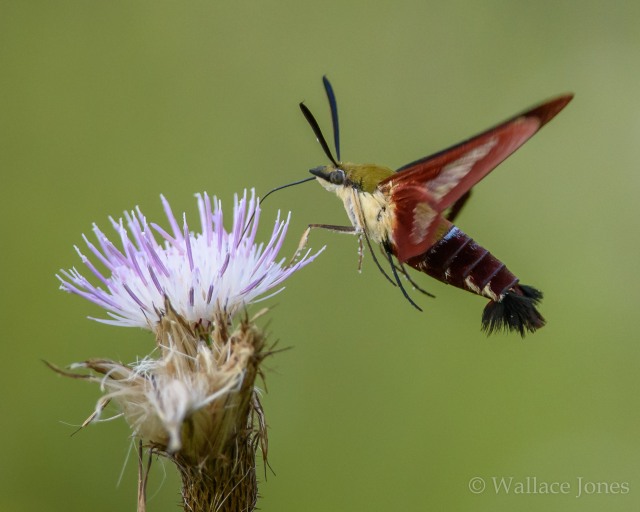 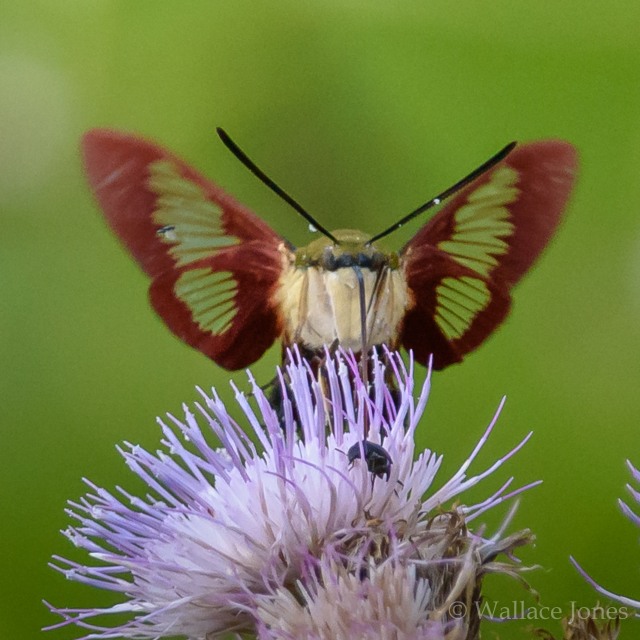 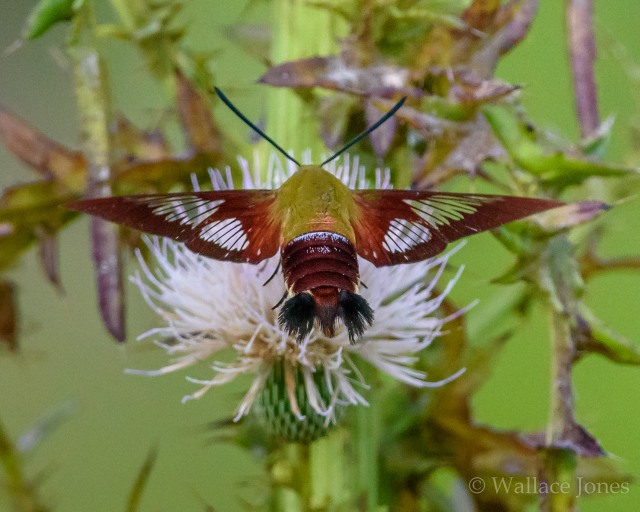 After all the drama, the remainder of our morning exploring Colt Creek State Park was rather calm. We didn’t locate any early bird migrants, but we certainly enjoyed spotting a Northern Parula singing his heart out, a gorgeous Red-shouldered Hawk, a diverse selection of insects and for a grand finale we were treated to a fishing exposition by a young River Otter.

Our tangerine breakfast was delicious but small. Time to head home for leftover okra, tomatoes and rice. Mmmmm!

Some additional Beauty! from the morning’s adventure.

A male Northern Parula wouldn’t give me a clear shot but he certainly belted out his wonderful ascending song for us!

Patrolling near a lake shoreline, a Prince Baskettail (Epitheca princeps) shows off his unique wing pattern.

The large Eastern Lubber Grasshopper (Romalea microptera) averages around two inches (55 mm) in length for males and 2.75 inches (70 mm) for females with some up to 3.5 inches (90 mm) not unusual. If nothing else, they are colorful! 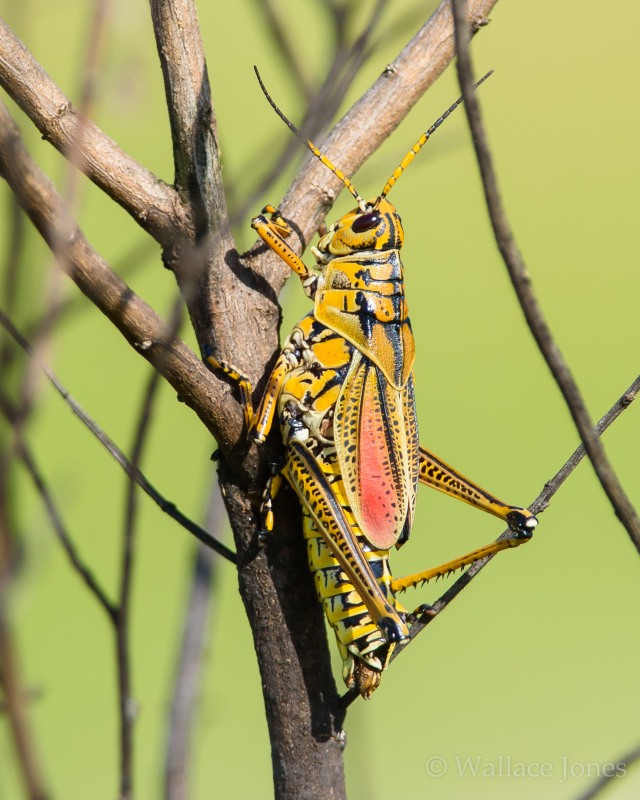 The thistles (Cirsium horridulum) attract all sorts of pollinators in addition to the Hummingbird Moth. Here, a Cloudless Sulphur (Phoebis sennae) retrieves a bit of nectar.

Gini spotted a Red Saddlebags (Tramea onusta) atop a spent thistle. No nectar for this lady dragon, but she has a great perch to spot potential breakfast bugs.

A Bumble Bee transports his cargo of pollen from one thistle to another. A quick drink for his efforts and he’s off to take a load to a different flower.

Measuring about an inch (25 mm) in length, the Black and Yellow Argiope (Argiope aurantia) is a colorful spider who usually includes a “zig-zag” design near the center of her web.

Hoping to spot a frog or a lizard, an adult Red-shouldered Hawk didn’t pay us much attention as we admired one of our most common raptors.

A Dorantes Longtail (Urbanus dorantes) has forsaken the sweet nectar of the thistles and gone over to the dark side of sampling the forbidden fruits of an invasive Brazilian Vervain (Verbena brasiliensis). No worries. He’ll be back. 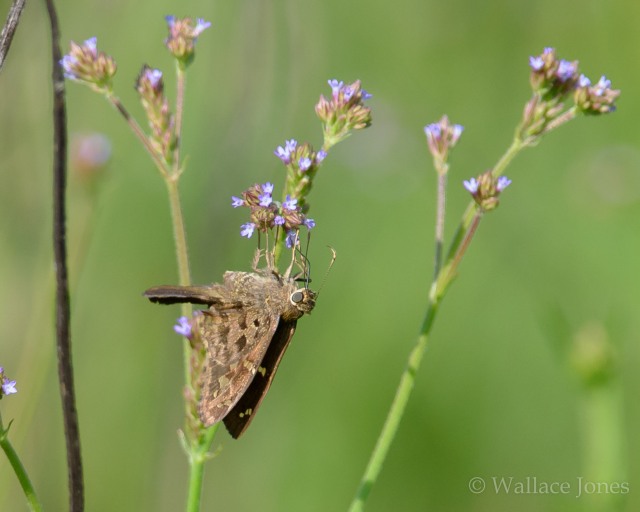 Averaging 1.5-2 inches (45-55 mm), the American Grasshopper (Schistocerca americana) is sometimes referred to as the American Bird Grasshopper due to its strong flying abilities. This insect causes significant agricultural damage each year. It certainly is handsome, though!

It’s hard to miss a male adult Roseate Skimmer (Orthemis ferruginea)! There isn’t much in nature with that color.

One of the smallest of the grass skippers, a Delaware Skipper (Anatrytone logan), has few markings and usually stays hidden near the ground. This one crawled onto a blade of grass for a moment – and a picture.

It’s natural to try and post nice, clear photographs of a subject in its natural environment. As a birder, I can attest that it is far more normal to see only bits and pieces of a bird most of the time! Such is the case with this Red-bellied Woodpecker who remained behind foliage and simply would not allow a decent, clear photo.

One of a half-dozen dark-colored butterflies in our area, the Black Swallowtail (Papilio polyxenes) also enjoys visiting, guess what – thistles!

The morning dew highlighted the golden glow of the wings of Needham’s Skimmer (Libellula needhami).

We watched this young River Otter fishing in Colt Creek for a few minutes until he realized we were there. Sploosh! A disappearing otter. 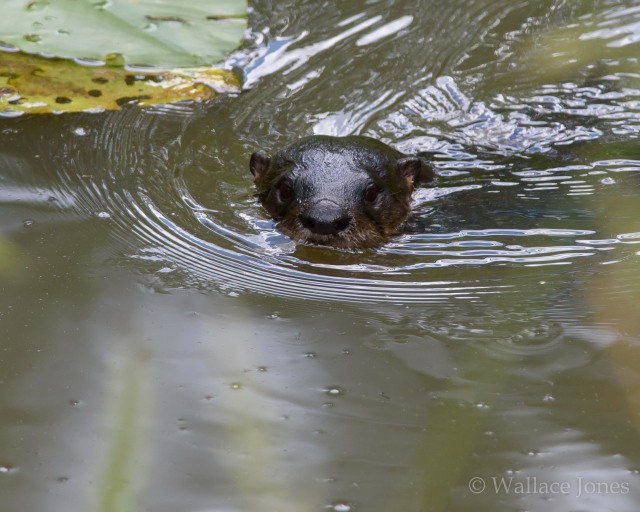 Okay, so I may have started a little over the top with dramatic license, but it was a great morning to be out in nature! Pretty neat to review old notes, make a plan to see if history would repeat and, ultimately, to enjoy success. Take a look at your own notes or photographs from this time in past years. Perhaps it will lead you to your very own Babylon! Blood! and Beauty!